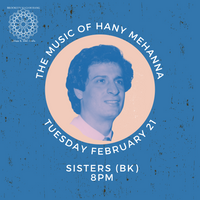 Hany Mehanna is a musician and composer living in Egypt. As a master keyboardist, Mehanna performed alongside Umm Kulthum, Abdel Halim Hafez, and was a member of Al Firka Al Masiya (The Diamond Orchestra). The music performed will be a selection of his compositions for orchestra, film scores, and songs from his 1973 album "The Miracle of the Seven Dances".