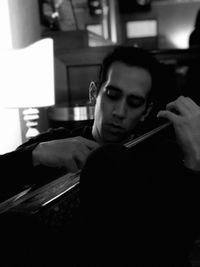 George Abud is a Lebanese-American actor and multi-instrumentalist. Brought up in a family of musicians he has immersed himself in Classical Arabic music for over 20 years. He has originated roles on Broadway, Off-Broadway, has been nominated for a Drama Desk Award, and is the recipient of a Daytime Emmy Award for his work on NBC’s Today Show with the Broadway production of The Band’s Visit. Coming from four generations of Lebanese Oud players, he loves sharing the beauty of the instrument with others.