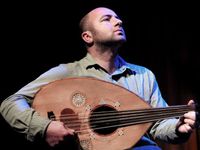 New York based Palestinian-American Zafer Tawil is a virtuosic performer on the oud, violin, qanun and a full range of Arab percussion instruments. He has performed with numerous musicians ranging from Sting to Arab music greats such as Simon Shaheen, Chab Mami, and Bassam Saba to avant-garde composer/performer Elliot Sharp, among others. Zafer has composed music for a number of films including the Oscar-nominated Jonathan Demme film Rachel Getting Married.