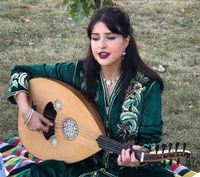 Jennifer and her "takht" ensemble will be performing a variety of Tarab music within the repertoire of classical female Egyptian vocalists, including Oum Kalthoum, Asmahan, Souad Mohammed, and more.
https://www.jennifergrout.com
https://www.facebook.com/jennigrout

Jennifer, the American singer and luthist from Arab's Got Talent, grew up in a family of musicians and began her artistic career as a classical singer. A native of Boston, MA, she studied at Longy School of Music and Walnut Hill School for the Arts. Later, she attended McGill University in Montreal, Canada, where she obtained her bachelor's degree in classical voice. While living in Montreal, she developed a great interest in Arabic music; she learned to play the "oud" (Arabic lute) and began listening to well-known Arab singers such as Fairuz and Umm Kalthoum. She quickly became involved in the community of Arabic music in Montreal where she studied with several teachers, including Aziz Daouni, Zied Benamor and Mohamed Masmoudi, and picked up a side job of performing Arabic music regularly at a local Syrian restaurant called "Kaza Maza." Jennifer began an ongoing study of Tarab singing with Mr. Mohsen Soua, the administrator of an exclusive classical Arab vocal music forum called "Zaman Al Wasl." Throughout her studies, she also performed with the Michigan Arab Orchestra under Michael Ibrahim, and attended renowned Simon Shaheen's Arabic Music Retreat in Massachusetts, where she took voice lessons with Rima Khcheich and had her first solo debut. In 2013, she had the chance to appear on MBC's Arab's Got Talent, singing pieces by Oum Kalthoum and Asmahan, and managed to come in second place. She went on to participate in several festivals in Morocco, such as Timitar, and other concerts abroad in Lebanon, Dubai, Kuwait, Tunisia, Canada, Qatar, and the USA. She has spent a large portion of her career in Morocco and has also been influenced by it's various musical styles.