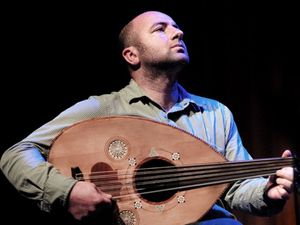 Zafer Tawil is a virtuoso on ‘oud, violin, and qanun, and a master of Arab percussion. Zafer has performed in concerts across the country, including performances with numerous musicians ranging from Sting to Arab music virtuosos Chab Mami, Simon Shaheen, Bassam Saba and George Ziadeh, to avant-garde composer/ performer Elliot Sharpe. He was a featured composer and performer in acclaimed director Jonathan Demme's Oscar-nominated film Rachel Getting Married and is composing and performing for Demme’s next film project, Zeitoun, based on Dave Eggers’ book about Abdulrahman Zeitoun’s post-Hurricane Katrina odyssey. Zafer has worked on many collaboration concerts involving classical Indian and Persian music as well as Arab/jazz fusion. He has held workshops on Arab music at many institutions and universities across the United States. A native of Jerusalem, Palestine, he resides in New York City.