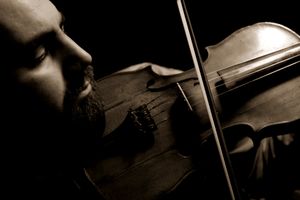 Sami Abu Shumays is a multi-faceted artist, teacher, scholar, and arts administrator.  He is a vocalist and violinist performing the music traditions of Egypt and Syria, and he founded and leads the ensemble Zikrayat, which performs music and dance traditions from around the Arab World, with a special focus on music from mid-20th Century film musicals made in Cairo.  Zikrayat has performed at numerous venues, including Lincoln Center, Joe’s Pub, C.U.N.Y. Elebash Hall, Alwan for the Arts, Drom, the American Folk Festival, the Lowell Folk Festival, and the Global Film and Music festival at William and Mary.

As a teacher and scholar he has led workshops around the U.S. in Arab music, published on maqam, and developed unique online resources for learning Arab music at maqamlessons.com (he is also a contributor to maqamworld.com) and is co-author, along with Johnny Farraj, of "Inside Arabic Music", a forthcoming book published by Oxford University Press.